Deprecated: The each() function is deprecated. This message will be suppressed on further calls in /home/customer/www/andersonhospital.org/public_html/administrator/components/com_seoboss/lib/Snoopy.class.php on line 651
 News & Events - Anderson Hospital 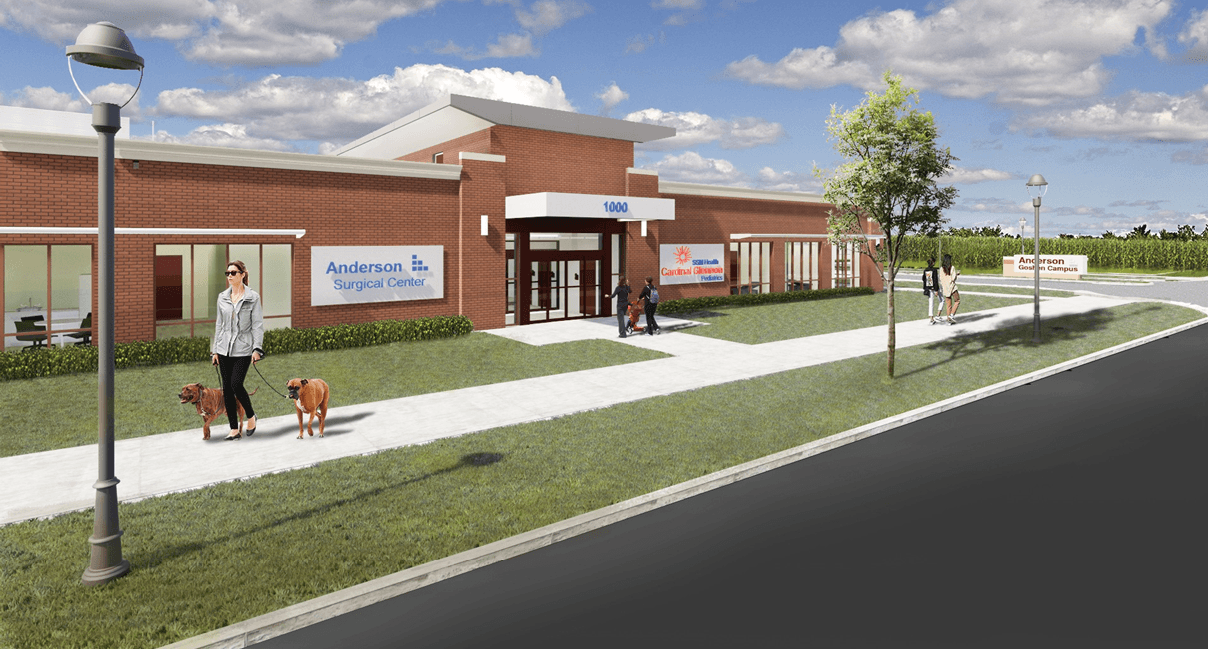 Anderson Healthcare is pleased to announce plans to expand access to medical services in the Metro East communities.   The expansion involves development of a 10 acre parcel of land on Goshen Road in Edwardsville across from the YMCA Goshen Center.  The planning objectives are to create a medical office campus within the Town Center Development for the benefit of the surrounding community as well as future developments within in the limits of the I-55 Corridor planning area.  The medical campus will be walkable for future residents in the Town Center and neighboring residential proposed districts.

The medical complex will be known as Anderson Goshen Campus and will begin with a one story building that will house an ambulatory surgical treatment center and a pediatric specialty clinic to be located on the southwest corner of the site.

The surgery center will provide an array of services for both adults and children.   “Our plans are to provide an exceptional facility and patient experience,” said Lisa Klaustermeier, Anderson Hospital Chief Nursing Officer.   “The surgical center will include private patient pre and post-operative areas, two operating rooms and a procedure room.  A lab draw station and plain film x-ray machine will be on site to complement surgical services as well as provide an additional outpatient service to local residents.”

SSM Health Cardinal Glennon Children’s Hospital has signed a letter of intent with Anderson Hospital to be the pediatric partner, in partnership with SLUCare Physician Group, in this unique facility.  “Anderson Hospital and SSM Health Cardinal Glennon Children’s Hospital  have a longstanding relationship that has enhanced pediatric services in Madison and our surrounding counties,” said Keith Page, Anderson Hospital President and CEO.  “This facility continues that partnership while also offering exceptional outpatient surgery options for adults.”

Three additional buildings are planned in the future for the complex and may include a physician office building, urgent care center and imaging center.   This project is subject to approval by the Illinois’ Health Facilities & Services Review Board.   Anderson Hospital hopes to receive approval from the state by the end of 2018 with intent to break ground on the project in early 2019.

Anderson Administration, Board Members and special guests attended today's ceremonious groundbreaking to mark the start of a new ExpressCare facility in Troy!  The Troy ExpressCare will be conveniently located at the corner of Illinois Route 40 and Main Street opening in early 2019. 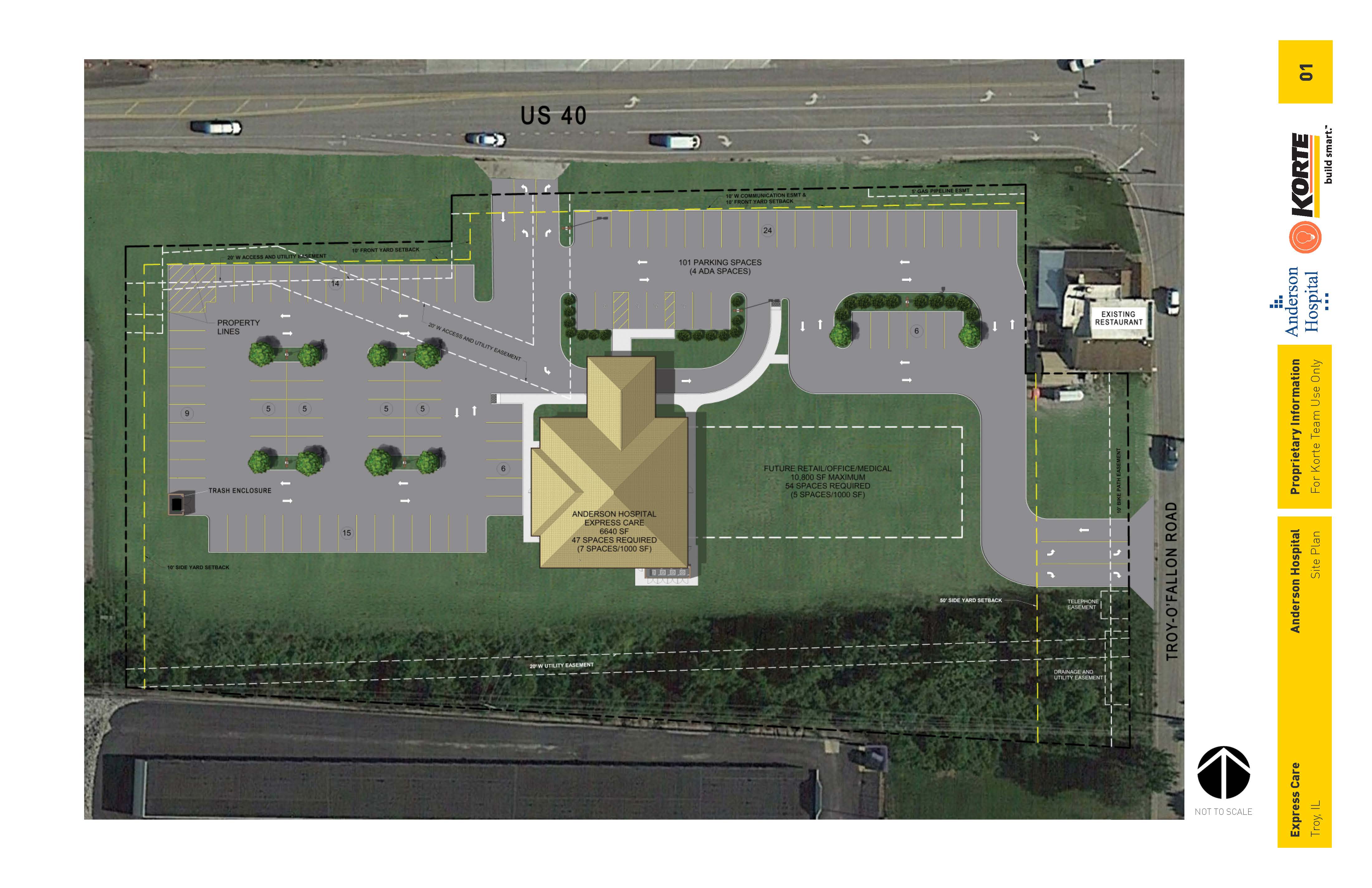 Today was a great day In Remembrance at Anderson Hospital. 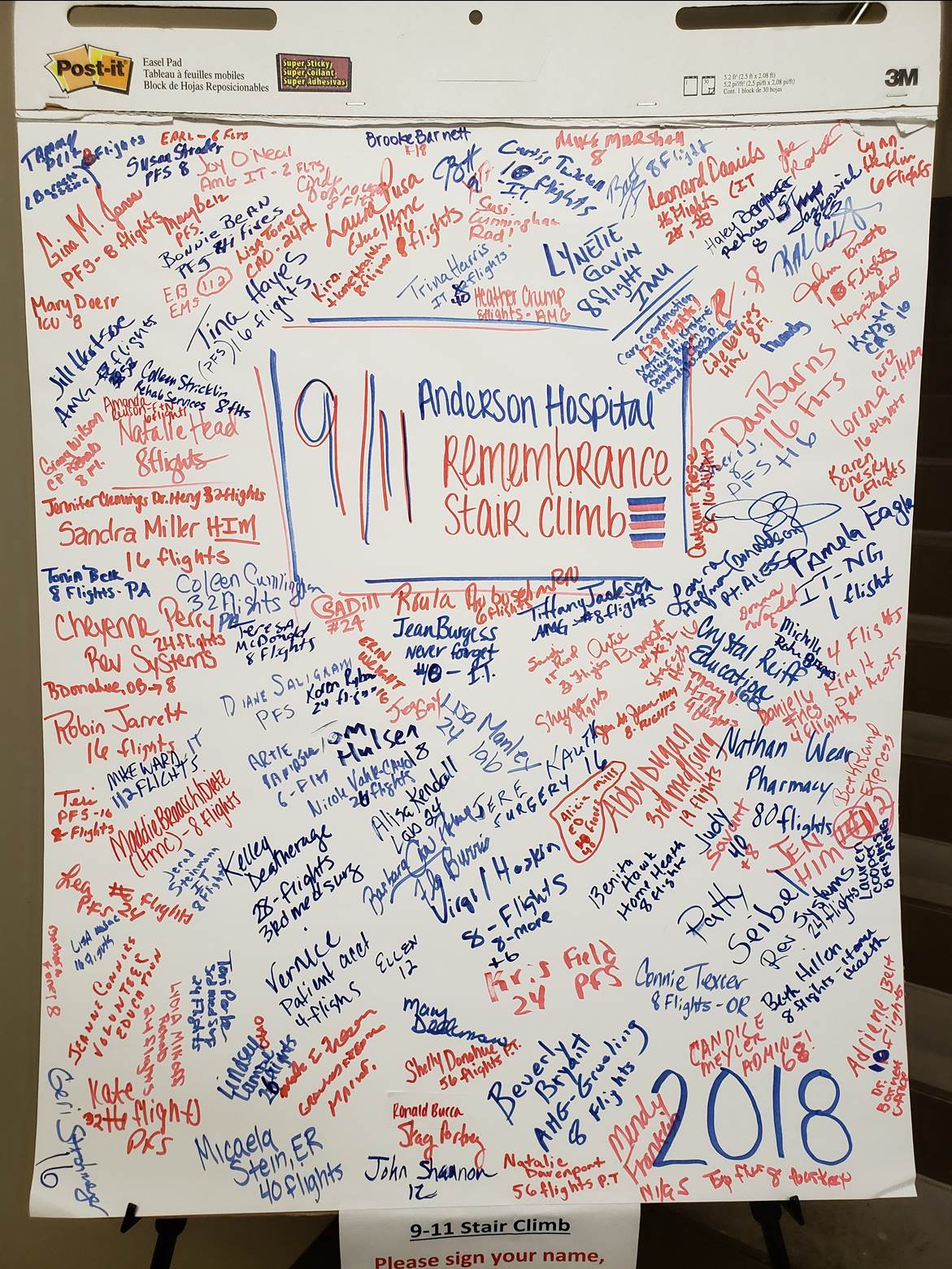 Emergency Preparedness and EMS Director, Eric Brandmeyer, took the time to reflect on his climb and for whom he climbed writing:

Today I had the opportunity to memorialize Paul Beyer FDNY.

When the first of two planes slammed into the World Trade Center at 8:48 a.m. on Sept. 11, Firefighter Paul M. Beyer was returning from an EMS call to a downtown Manhattan housing project.

The 37-year-old lifelong Tottenville resident, like the rest of his Engine Co. 6 crew, was due to finish his shift when the firefighters heard a loud explosion. As they neared One Police Plaza en route to their Beekman Street firehouse, a police officer pointed to the World Trade Center, where billows of smoke were beginning to pour out of the upper floors. Heading to the scene, they picked up William Johnston, who was just starting his shift.

Although Mr. Beyer was suffering from excruciating back pain caused by the construction of a new two-family home for his family and mother-in-law that he was working on, he didn't want to take the day off or let anyone know he was hurt.

Concerned for her husband's health, his wife, Arlene, called the evening before the attack to see how he was feeling. Instead of complaining, Mr. Beyer focused the conversation on the new house and his wife's apprehension about starting a new job.

"Don't worry, everything's going to be OK. We don't need all this stress," she remembered him reassuringly saying during their last phone call.

It was with that same attitude that Mr. Beyer approached the rapidly escalating disaster at the World Trade Center. No matter how bad a situation was, Mr. Beyer was known for trying to keep everyone calm, whether it be with a humorous story or a soothing word.

"He was a great fireman," said his friend, Firefighter Billy Green of Engine Co. 6. "I knew him for eight years and never saw him angry. He was always able to see the good."

A firefighter from another company later told Mrs. Beyer that he was frightened until he looked at the calm determination in her husband's face. "He had that 'nothing bothers me, let's just do it' look," she was told.

"I saw him on the 9/11 tape [the CBS documentary shot by two French filmmakers, brothers Gedeon and Jules Naudet] and I know that look," said Mrs. Beyer. "I'm sure they knew how serious the situation was, but he had a responsibility as a fireman."

As Mr. Beyer and three other crew members carried a hose up the stairwell, the building began to shake. Mr. Green last saw his friend on the 31st floor of Tower 1. Their engine, stationed on West and Vesey streets, was equipped with a specially-built pump powerful enough to push water to the top of the 110-story towers.

Although crushed in the collapse of Tower 1, that engine will become part of a permanent memorial display in the New York State Museum in Albany this fall. Mr. Green and engine operator Jack Butler, who was manning the Trade Center standpipe, were the only members of the crew to survive.

"Ever since I knew him, he was talking about being a fireman," said Mrs. Beyer who grew up in the same Tottenville community as her husband. "He used to say you could be a fireman slash anything."

In addition to working as a firefighter with Engine Co. 6 for the last eight years, Mr. Beyer also did side work as a welder and paver. From 1989 to 1993, he worked as a machinist with the city Parks Department in Queens. Prior to that, he worked as an apprentice machinist for the former Martin Schall Machine Co., Elm Park.

"He didn't sit still much. He was always working on something," said Mrs. Beyer. "He was a Mr. Fix-it."

Thank you for giving me this opportunity. 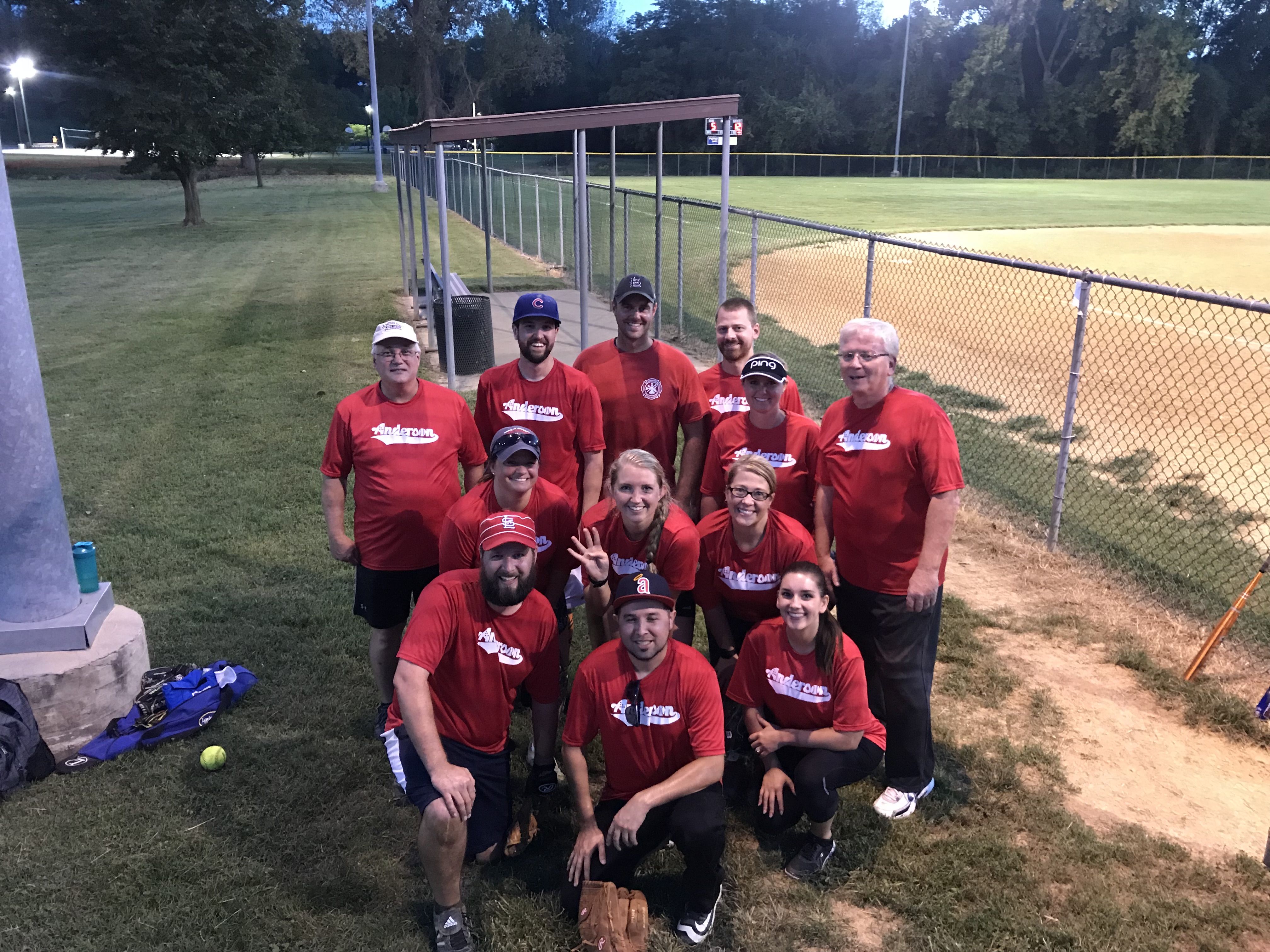 Leader in the Lowest Readmission Rates

Tracking the number of patients who experience unplanned readmissions to a hospital after a previous hospital stay is one category of data used to evaluate the quality of hospital care.

Readmission rates have long been a trusted measure of effective and responsible care, but only since the Affordable Care Act (ACA) of 2010 established the readmission reduction program (effective October 1, 2012) did it become a primary assessment driver in the industry.

The program was specifically designed to incentivize hospitals to take strategic action in reducing expensive and unnecessary hospital readmissions. CMS defines these readmissions as “an admission to a hospital within 30 days of a discharge from the same or another hospital.” At the time of implementation, Medicare was seeing a readmission rate of 20% of its hospital patients within one month of being discharged, a rate CMS decided was excessive.

At Anderson Hospital, we are proud to be a leader in our area with an outstanding readmission rate under the national average and best in 25 miles radius of our service area. 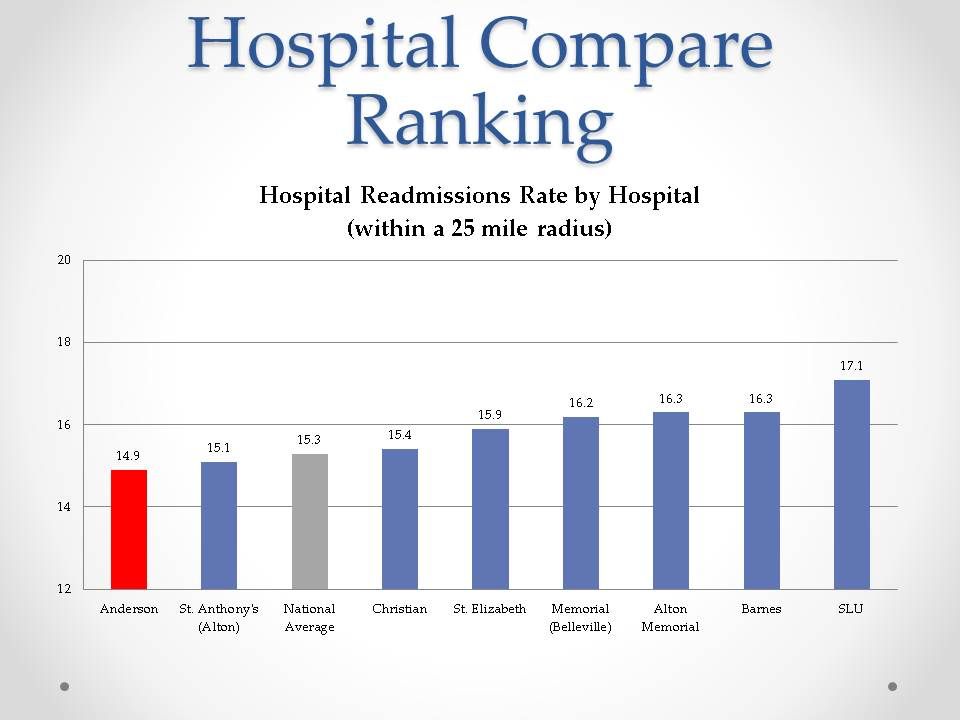